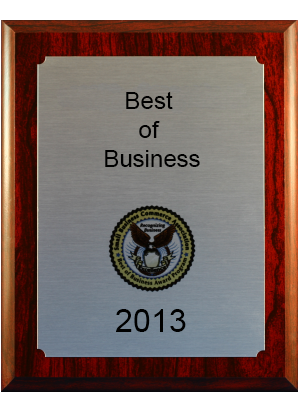 I received a congratulatory notice in my inbox that not only had I been nominated (I must’ve missed that email), but I had also been awarded the 2013 Best of Business Award in the Small Business category.

This smelled bad from the get-go. Especially since the subject line read:

#1 – I dissolved my incorporated status a couple of years ago in favor of an LLC entity.

#2 – I haven’t lived in Norwalk for over a year, so my recognition there was somewhat suspect.

If that weren’t enough to put me off, this bogus-looking plaque did.

I wanted to find out more about who the organization was distributing said awards.  Someone has gone to a lot of trouble to rip off the less jaded business owner out there looking for validation. They have constructed an in-depth site that says a bunch of nothing.

Once again, google is a great friend. The fourth entry down when I googled the signator’s name yielded this juicy tidbit, exactly what I was looking for:

Aug 16, 2011 – These fresh insults to fair business practices ride into town on top of the usual …. Arizona firm called the “Small Business Community Association” (SBCA). … Other than Chairman Rich Thurman, members of the “Selection …