I Hate to Complain, But… 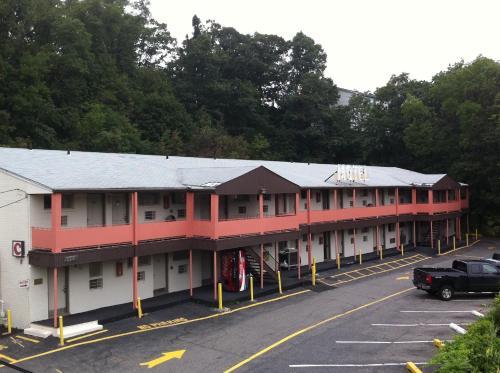 I rarely use this forum to rant, but after attending and presenting at an unnamed event recently, I have to get some stuff off my chest.

I paid for the opportunity to speak at a holistic trade show based on an esteemed colleague’s positive experience. She’d had a good turnout for her talk and signed up several audience members for her services after she presented.

The show I agreed to participate in was not in the same location. Can you hear your realtor’s mantra here-LOCATION, LOCATION, LOCATION? The one I spoke at was in Fort Lee, NJ, a hop, skip and a jump over the GW Bridge. Seemed like a worthy destination, but the energy of the hotel and everything approaching its entrance was, how can I put this delicately…gross.

The facility itself is part of a decent chain, but leading up to that address were three motels in a row that looked like this image. I could feel my good energy draining out of the soles of my feet.

When I got to the ballroom area where my talk would be, I quickly recognized the organizer and went up to her to introduce myself. I was one of 9 speakers at the event and had had lengthy correspondence with her about logistics and placing a full page ad in the program. Turned out, I was the only one who had made the $100 investment. It featured a photo of me and copy about my website and services.

“Hi, Paula,” I smiled. “I’m Jane Pollak.” I waited for a moment of recognition. None was forthcoming.

“And you are…?” she asked blankly.

“I’m one of your speakers,” I filled in.

She had promised a screen so I could show a short video clip. I’d brought my laptop and projector. When I asked her where the screen would be, she pointed at the beige folding wall on the side of the room and said, “That’ll have to do. There’s no screen.”

I walked around the trade show, hoping to be inspired by the quality of vendors and professionals, but felt more of my spirit disappearing bit by bit.

Maybe the speakers before me will be exciting, I hoped. I took notes to capture the ineffectiveness of the two I heard. Phrases like “this could kind of be” and “they heal certain things” and “people have reported that they’re more fulfilled” set the hairs on the back of my neck on end.

While my friend, the recommender, had had 30 attendees in her audience, I had a grand total of nine, none of whom resembled any of my clients. Their expressions were vague, barely making eye contact with me. One gentleman, who came in with about six minutes remaining in my speech, stayed after as I was packing my things.

“Why do you think parents do that to their children?” he inquired, referencing a line I mention in my closing story about my mother’s insistence that no one would ever pay for one of my pieces of art. He then invited me to speak at his meet-up group on toxic parents. His smile revealed no teeth, but he was a Ph. D. from an Ivy League school. I asked if he had a business card. He offered me a sheet of paper with his credentials on copier paper.

Normally, at an event that I’m participating in, I would stick around, meet more of the people and thank the organizer. After this one, I just wanted to get out of the building.

What did I learn? I had a sense early on that this would not be at the level of professionalism I am used to and desire. I could have trusted my gut, forfeited the small fee I’d been charged and written it off completely. My companion that day, who made the whole thing even tolerable, mentioned that he had visited the organization’s Facebook page. He noted that there were 900 invited guests and only 17 had accepted the invitation.

I was glad he told me that after I’d already left.