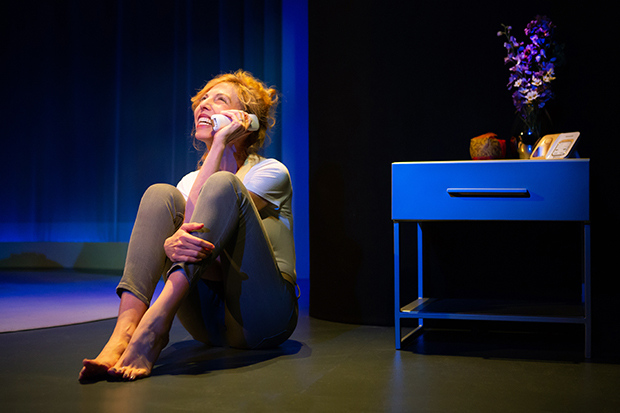 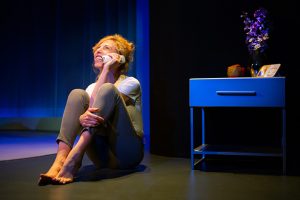 Accidentally Brave is a one-woman show written by and starring Maddie Corman. The title is apt as the actress/playwright was hurled into a life-changing trauma she had not signed up for. Her courage and fortitude to face her new life script are evident throughout the production. She didn’t ask for a test of her bravery. It arrived, wholly unsolicited, but there she is, as brave as any person I’ve ever met.

From the get-go Corman announces that this is her story. Her husband, charged with dealing in child pornography, has his own story to reveal, as do her three children. She does not violate their right to share their own experiences if and when they choose to do so. Meanwhile, we get to watch this gem of an actress take us through the last few years since the day police arrived at her home in Westchester to seize her husband’s computer.

As she confesses at the beginning of the play, “I am not okay.” Just in case you were hoping for a neat and tidy conclusion.

But, of course, she’s more than okay. The flow of the show is impeccable, directed by the brilliant Kristin Hanggi. Maddie takes us through the emotional turmoil of this discovery and the way everything immediately turned completely upside down. She’s candid, funny, wise and so, so brave. We travel with her to her husband’s rehab, her yoga classes, and to Stew Leonard’s where she may be buying her last pumpkins for a very long time.

What I most appreciated in this production is how generously it makes space for everyone’s humanity–her own rage, shame and horror– as well as her growing understanding and fractious relationship with her husband’s terribly flawed dependency. Maddie openly admits how much 12-step recovery has been a saving grace for making her own life manageable (or not) one day at a time as well.

This is a play for anyone who has been deeply affected by someone else’s behavior and is willing to witness one woman’s path to acceptance and love.

Personally, as I’m about to go public with my memoir, I hope to emulate Maddie Corman’s self-assuredness that it’s okay to tell your story.